In which I somehow read three memoirs and the last installment of a favorite trilogy. 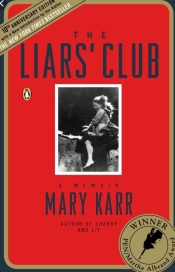 Born in East Texas in the mid-1950s, Mary Marlene Karr grew up surrounded by deadly forces and beings – hurricanes, blazing heat, the oil industry, poisonous snakes, spiders, giant rats, alligators, stinging jellyfish, undertow. Her childhood was an extended calamity. But other people were perhaps the most dangerous creatures.

Memories were deadly, too, as they both evaded and invited inspection into past tragedy. Karr wastes no time getting to the butcher knife- and sheriff-rousing-type episodes of her youth, and circles this element of recollection. Some points in her life are almost too painful to be fully known, yet call out for it: “When the truth would be unbearable the mind often just blanks it out. But some ghost of an event may stay in your head, then, like the smudge of a bad word quickly wiped off a school blackboard, this ghost can call undue attention to itself by its very vagueness. You keep studying the dim shape of it, as if the original form will magically emerge. This blank spot in my past, then, spoke most loudly to me by being blank. It was a hole in my life that I both feared and kept coming back to because I couldn’t quite fill it in.” A central weight in Karr’s writing is cultivating fading but extant memories and telling stories about them.

Karr writes of an alcoholic father and a traumatized mother haunted all her life by a secret her daughter finally wrests out of her. The ghosts are strong. Karr’s memoir is a string of trauma made drama by her captivating voice, at turns deadpan Texas vernacular and awash in sadness. She weaves her memories into a story that exists somewhere outside them, shaping the years into a slow burn of a reveal.

She honors her father in this: “…Daddy told the best stories. When he started one, the guys invariably fell quiet, studying their laps or their cards or the inner rims of their beer mugs like men in prayer. No matter how many tangents he took or how far the tale flew from its starting point before he reeled it back, he had this gift. He knew how to be believed.” Karr internalized her father’s storytelling, but also sees beyond it. Father and daughter tell tales, the elder to command respect and awe, truth be damned, the younger to mine the sparks of truth deep inside.

I think this is a book I will keep coming back to. Like the faint smudges of Karr’s past truths, I can’t help but be drawn back to her flame. She knows how to be believed.

I’d wanted to read this book for a while, but I admit Anthony Bourdain’s death earlier this summer made it especially urgent. I’ve always loved his travel narration from his shows – no matter where he went, what he ate, or the people he met, his thoughts on everything were eerily bewitching. His insights into worldwide culinary adventures cut through the noise of othering and exoticism. Over the years of his travels, we also got to see him grow and change, which not every human being might have allowed, especially in his own lifetime.

“Kitchen Confidential” is a recounting of such growth and change close to home, in the kitchen. Bourdain’s eye spares nothing from his razoring takedowns – if you don’t want to know how the sausage literally gets made, perhaps save this one – but he turns his sharpest observations on himself. He may be blustering at times, boasting about withstanding the mind- and finger-busting demands of the modern restaurant chef’s life, but he lays his own flaws bare. He takes us from his confident days as a Culinary Institute of America grad, eager to prove himself, to a hollowed-out, drug-addicted vagabond, to a humbled journeyman cook. Bourdain does not claim to be the best of anything, and it’s his sense of humility and respect for the trade that shine brightest.

Bourdain heaps praise on those he sees as wholly devoted to the church of the professional kitchen. Much of the book recounts the people he’s worked with over the decades, the piccadillos and predilections of everyone from line cooks to brand-name restaurant owners. In an afterword, Bourdain wrote, “Human behavior remains a mystery to me.” That may have been so, but he unquestionably had his scarred chef’s fingers on many pulses, and incisively captured the characters of a host of fellow cookies. His peering into the people behind the plates is what gave his later work much of its glow.

My favorite part of the book was seeing Bourdain’s awakening into a traveler. He is invited for a stint at the Tokyo location of Les Halles, and is utterly transformed. The world is fully opened to him, and food takes on greater meaning in a new context. Bourdain is born again in Tokyo. Having given himself to the kitchen for so long, he comes up for air in a different universe, and is excited to be a martian. He was the stranger ready to become familiar. His “investigations” would take up the rest of his life. “I did not want to leave. I had only begun to eat. There were a million restaurants, bars, temples, back alleys, nightclubs, neighborhoods and markets to explore….This…this was excitement, romance, adventure – and there was so much more of it, too much more of it for even another month, another year, another decade to adequately contain my investigations. I knew I could live here now.” 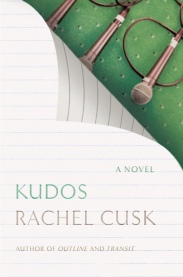 Sofija Stefanovic became a full-fledged person in two hemispheres, multiple languages, and a host of cultures and subcultures. Her memoir, “Miss Ex-Yugoslavia,” is her attempt to draw a map of all these places and the people in them. Born in Belgrade in 1982, Stefanovic writes of a patchwork ex-Yugoslavia disintegrating into ethnic conflict and wars, rent apart by political strongmen. Her family eventually moved to Australia, but they ping-pong back and forth. As in classic immigrant tales, she never feels like she belongs anywhere.

Stefanovic begins and ends the book with the titular beauty pageant – “bringing young women from a war-torn country together to be objectified. But in our little diaspora, we’re used to contradictions.” These bits are where she really comes to life, in bringing all her characters together to witness something ridiculous that spells something deeper about their experiences. One of the contestants still has shrapnel from a bomb, all of them were affected in one way or another by war, but they are here to wear swimsuits and high heels. Everyone claps.

I wish I had listened to the audiobook – Stefanovic is a public storyteller, and I think her personal delivery would have brought just the right tone to parts of the book that didn’t light up for me. Her story is fascinating, illuminating as it does a particular immigrant diaspora that contains multitudes. But I think her physical voice is what gives her story the most strength. In any case, stories like hers are the backbone of everything.