In the welcome sunshine of a Sunday morning, a wall went up. Not the structure, but the substance. A wall with a door in it, except this portal was painted on the outside. Twisting tubes, faceless figures, one large bear, a Superman, and many, many bricks. For a day, we marked. We painted. We made a mural, but it was one person’s vision.

This is Mike Turner’s work – look at this. And this. And THIS.

Based on a piece called “Vertical Suburbs,” the mural is a black-and-white expanse of brick walls, windows, tubes, and vignettes that invite and compel, leading places but not resolving. You can start anywhere along its length, but never really know where to end up. You can look at it up close, or from across the street – either way, it offers up a sort of labyrinth. You can stare at individual lines and shapes and not know what it put into your brain, but sit in that uncertain wonder for a while. It does things to whatever your thing is. 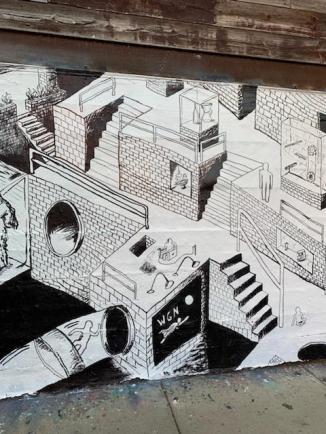 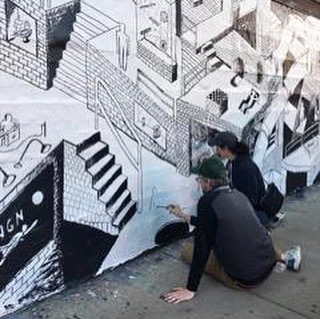 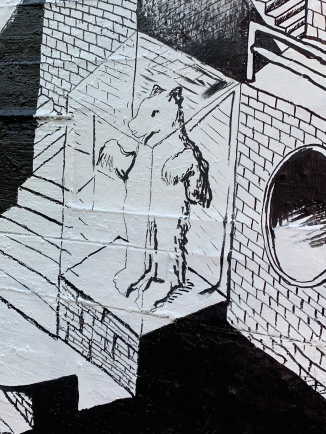 This mural was conjured on facade of the Violet Hour, a cocktail lounge in Wicker Park. Each month, they let a different artist muralize the exterior. Mike graciously let a group of friends help him put his up, thankfully in June, post-polar vortex. We pulled up on Saturday evening, a nice blank wall ready for us to reinvent it. As it turned out, weather and technology had other plans.

Mike and his fiancee Gina had planned the operation like a guerilla standoff – plenty of weapons at the ready to execute a quick(ish) mission, with all the backup needed to head off any issues along the way. However, you can’t reason with power converters that have previously tested fine in all readiness phases, only to fail in the moment of need. What had been planned as a projection of the original drawing onto the wall coalesced into a frantic search for a generator to rent, and ended in a parking lot of futility.

After having waited out a tornado-shaded downpour, ready to wipe every inch of the wall down with paper towels and get to work, we sat in the car, shadowed by a hulking Home Depot, talking about extension cords and batteries. (Also Patton Oswalt’s impression of Tom Carvel, somehow. Fudgie the Whale saved our sanity that night.) We resolved to try again in the morning, urgency nipping at everyone’s heels.

Sunday came with sun and breezes – cool even away from the lake. With a ladder bisecting the car, we drove back to the blank wall. Fueled by donuts and iced coffee, we faced that void again. The people in the group who actually knew what they were doing attacked it with renewed zeal, quadranting that sucker with tape and free-handing pencil outlines while Mike filled in details. A vision took shape. (In this phase, my contributions entailed playing seminal saxophone solos on YouTube and petting as many dogs as possible.) If someone had told us the night before we would end up Free-Soloing this mountain, we probably would have laughed with tight faces. We would have pretended not to scream inside. But today, in the sunshine, we did it because that was all we had left.

This was an experiment in a lot of ways – how do you prepare art for greater consumption? Do the weather gods want you to succeed? What happens to meticulous planning in the face of unforeseeable technological glitches? How many Home Depots are there in the greater Chicago area, and how long do they stay open? What do you do when Things Go Wrong?  How do people act around a mural in progress? (They say things. Out loud. A lot of things. Their opinions WILL be heard.) A collective mindset held the answer to all of these questions.

A bit of a mindmeld cloud collected over our group. Mike was the piece’s mastermind, and we went to him with questions, but we also trusted each other to work in between. We all tuned into the same buzzing sound, and worked off of that. A radio frequency was born. If this is what it feels like to join and be in a cult, then I am deeply susceptible to it and should probably seek help. Possible Cult Joiners Anonymous? Local Lemmings?

At one point, I joined forces with a friend to erase some of the remaining pencil marks – we went around with two brushes and one can of white paint between us, talking to ourselves and conjoined twinning up the place. The world melted away even more as we painted and painted. Nothing else mattered but to keep space open.

Things happen to you individually, too. You make so many bricks you become a line, just wanting to connect other lines. You think and say things that only make sense to the people working alongside you. Your only goal, your single-minded dream, is to do whatever it takes in this moment to get this work just a tiny bit closer to realization. It’s a little universe.

Passersby want to peek into this tiny cosmos. People walking by on the street tended to say whatever they were thinking out loud, whether alone or in a group. I couldn’t decide whether they wanted us to hear, or thought we were like zoo animals. Some seemed to be performing for their groups, remarking that this wall contained the passageway to a bar with “amazing cocktails.” “You knock on the door, and it opens!” (No, sir, that is not how it works.) Others wanted to name artists the work reminded them of, or explain how we were making the mural. Other people would just yell “THANK YOU” – for what, exactly? One woman went up to my partner in erasing and quietly said it, a hand on her arm, like this was a conspiracy. In slightly more sinister fashion, a man said this loudly while hugging me from behind as he kept walking. NO thank you. A couple of drunk bros demanded high fives and then said Mike should paint the apartment building one of them owns. In decidedly the most charming show of curiosity, a little boy took one of the stepstools and sat on it, clutching his lil drink, sipping through a straw and observing the goings-on. Like a tiny king, he surveyed the workers, then summarily dismissed the whole thing and walked off, his dutiful parents trailing behind.

When we finished the mural, hours had slipped by, and sunset was imminent. We went to eat pizzas so big I could have used them as sausage-y blankets. We went home so full and so tired. This was easily one of the most satisfying, fulfilling days of my life. I got to help create something with a group of excellent people – even if I’d never picked up a marker or brush, I’d have been thankful just to be in that headspace. It really was a storm on a sidewalk. I was most floored by the fact that Mike took some of his art, secured a public space for it, and then let other people help him put it up on a wall. Even though the mural is only up for a month, it adds a layer to the city, and I hope many people will walk by and take a piece of it in. It doesn’t have to envelop them like a blanket pizza, but it’s something new to process. 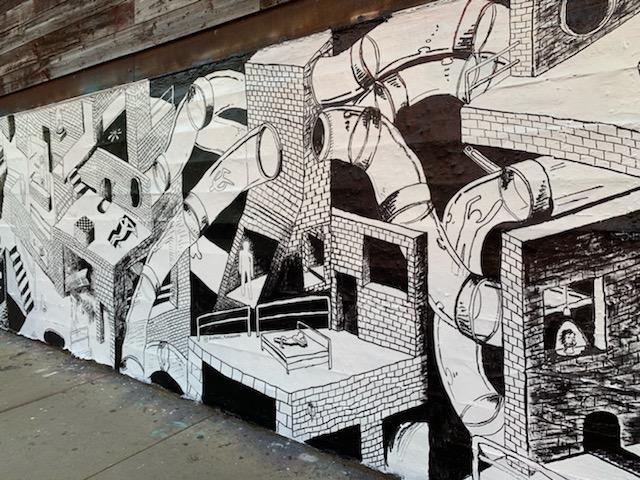