There is so much weirdness I think about all the time, varied and seemingly disparate things running through my mind. (I am large, I contain multitudes.)  I’ve always been inclined to dig further into the shiny bits and bobs that catch my eye, but what about when those things are…not too deep to begin with? For example, what stupid phrases could I caption every medieval painting in this gallery with? What happens when a stalagmite would rather be a stalactite? Why does pro tennis player John Isner appear both extremely boring and also evil as he is tall (6’10”)? I don’t shy away from this, as anyone I’ve ever talked to has learned. I’ve embraced the shallows. I’ll forever be drawn to what are perhaps life’s dumber moments, its lower brows, its cruise ship-caliber offerings. And I need an outlet for these preoccupations. This is part of a series of dispatches from the Mixed-up Files of Ms. Claire G. Brindley.

There are a lot of good things about the nature series “Planet Earth.” Sweeping earthly vistas. Important records of the world’s wonders. Dazzling sea creatures. Lizards that have to run from scary-fast snakes just to go to the beach. But my favorite part is less a visual smorgasbord of natural beauty and animal ingenuity and more a soap opera.  It’s trouble in paradise.

It’s the Islands episode of Planet Earth II. We’re on Escudo off the coast of Panama. Everything is beautiful and nothing hurts, except looking at the sky because it’s so dazzlingly blue. Enter the sloth (or “slooth” as David Attenborough intones). We’ll call him Slooth John B.

The camera swoops over the tiny island in all its jewel tones. Sunlight filters through neon-tropical green leaves and shimmers up waterways. David tells us we’ll see “the extreme lengths animals go to survive.” Here we have a variation on that theme: what happens when a man pygmy three-toed sloth loves a woman pygmy three-toed sloth very much? A special sloth hug? Let David tell you.

We first glimpse Slooth John B climbing methodically up some branches, his hair tinged green. He is a slo-mo marvel. David narrates the island as a “microcosm of our living palette,” and it’s too-perfect an analogy for sloths themselves. These slow upside-down jungle puppies are also their own little ecosystems, living peacefully unto themselves.

John climbs on with his little Hamburglar face, stealing my heart instead of Happy Meals. He doesn’t have to contend with predators and eats mangrove leaves to his teensy heart’s content, but there’s something missing in his island life. There aren’t many pgymy sloths left, and John needs to perpetuate the species.

An alarming scream pierces the humid air. What David deems “an enticing call” sounds like when I think I see a bug or I accidentally burn myself. But it’s perfectly pitched slothy music to John, since it means a lady sloth is nearby (we’ll call her Abigail). “Somewhere, out there.” John hops to it. Or rather, he slowly but gracefully swings his way toward that sexy sound.

David, full of jokes as always, says John’s motions towards Abigail are “for a sloth, a quick reaction.” He is booking it, his three long claws grasping branches and his body contorting to get the hell over to Abigail. John at full speed is beautiful, and would be soothing if he weren’t on a mission of love. This is an urgent life-and-death matter. And there’s one other thing – Abigail is across a river. A deep one.

Back at it again is David: “What should any red-blooded sloth do?” Next frame: John’s in the water, his slow panda head bobbing in the waves. At this point, I’m so scared for his life that I forget about his deepest desires. Don’t do it, John! Save yourself! But the arboreal cutie just won’t quit. The camera catches his water ballet in all its glory, and I calm down a little bit. He’s actually a great swimmer – his long limbs slice through the emerald liquid, and he’s making good progress. I want to get him a tutu. It’s seeming a little odd now that sloths live in trees and not the water, but I’ve long since stopped parsing the mysteries of nature and just enjoy the idiosyncrasies. 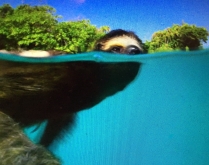 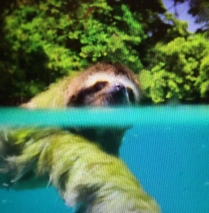 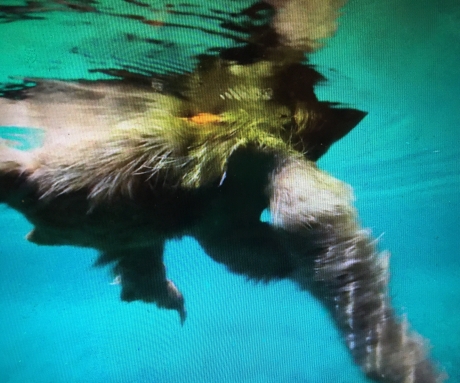 The sloth ship is steadying on. John and his boop-able nose make it to the other side. He gazes up at the treetops, his longing for love palpable. Abigail, he’s coming! A brown blob appears in the branches – “could this be her?” David won’t cut John any slack – “He does his best to put on a turn of speed.” His slick Romeo bod climbs the last few branches like he’s Tom Cruise in “Top Gun” and this is the highway to the sloth danger zone. Then we see another Hamburglar face turn toward him: it’s Abigail!

Abigail has a secret

This is where my heart falls through the floor. Just as we want to celebrate some sweet sloth love after an arduous journey, David says, “But she’s not the one. She already has a baby.” And another boop-able nose appears next to its mother’s. I am about to explode from the adorableness, along with John’s heartrending loss. Abigail just stares at him, her baby making cute faces.

John is left blinking at this tableau, suspended in the branches. He slumps, devastated. A sloth in love is a powerful force, and he lost everything. “Even life on a paradise island can have its limitations,” says David, really piling it on.

Another sloth cry echoes over the island, and John turns toward the sound. But this is where the tale ends. David only takes about four minutes to break my heart with John’s unsuccessful love story, but maybe he will try again. However, I’ll never know how my sloth friend fared – David turns his attention to Komodo dragons and leaves me hanging. So now I think about John way too much, and his sheer determination. Would I cross a river to get to Abigail? Would I keep trying like John presumably does? Meanwhile, this sloth keeps climbing branches in search of an elusive song.

We were here to learn about islands, those “worlds in miniature,” but we got a mini drama instead. No sloth is an island.