He was a boy in a plane.

It was 1945, and Earl Brindley took pictures in the sky. Of factories and formations, groups of hulking but graceful planes and the patterns of buildings they flew over.

My grandfather was a member of a ten-man crew flying B-17s over Europe in the last, bitter winter and spring of World War II. He was the radio operator, communicating the location of both his plane and the others in the formation. He would also have to man a rear-facing .50-caliber gun, and take photos on missions. So it was part of his job to document this war, and a changing face of combat. 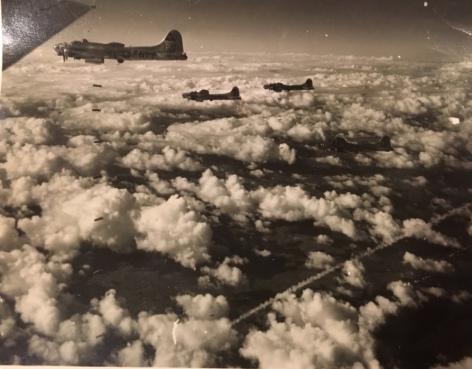 Earl’s outfit, the Eighth Air Force, was a new kind of operation. Instead of carrying out bombing missions at night, as was standard, they were to attack Germany during the day, open to counterattack by the Luftwaffe’s deadly forces. The B-17 was a new kind of bombing aircraft designed for these missions, meant to carry heavy loads over long distances. Boeing had worked to create this aerial battleship – its Vice President, Clairmont L. Egtvedt, described “searching for a flying dreadnought.” Upon seeing the B-17 on one of the first flights, a journalist dubbed it the “flying fortress.” 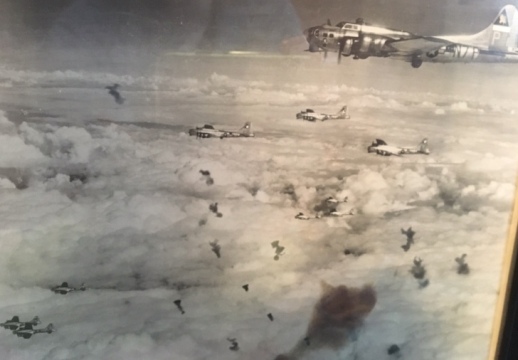 Attacking by daylight would allow bomber crews more accuracy on their targets – railways, factories, and other war mechanisms of the enemy. To avoid the anti-aircraft guns, the B-17 had to be able to fly into the stratosphere. At these heights, crews endured combat conditions both common across military situations, but ratcheted up by the rigors of flight: extremely high altitude, cold like nowhere on earth, bombardment from all sides (fire from both anti-aircraft guns on the ground and fighter planes in the air), and incredible noise: all rammed into a reinforced steel cylinder rocketing through the sky. They flew into the unknown. 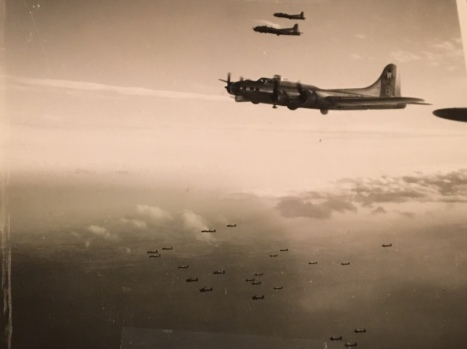 Earl’s photos help bring this experience to life. Born in rural Iowa, he joined the Army Air Corps in 1943, less than a year out of high school, and made it to the European theater in 1944 after months of flight training. As a B-17 radio operator, his responsibilities were a calculus of forms – the language and sound of Morse code, navigational properties, spatial awareness, and aerial photography. The images he captured are the closest I will ever get to understanding what he lived through – a 20-year-old from a farm who was now thousands of feet above the ground in a plane only recently innovated and meant to be an aeronautical death machine, flying missions above a continent he’d only seen on a map, handling a camera to give proof, making sense of it all through a tiny lens. In these past moments, I see his horizons, his skies.

From the little window by his radio operator station, and sometimes the bomb bay doors, Earl captured the silvery bodies of the B-17s, outlined against the clouds, dropping their payloads deep into German territory. The images are visceral moments of flight and the realities of war. Earl sees what transpired in those skies – mathematically precise paths through the universe, planes in formation, and ultimately annihilation. The aircraft are suspended above billowy clouds and an earth telegraphing blue. It is almost beautiful, but then the bombs come. 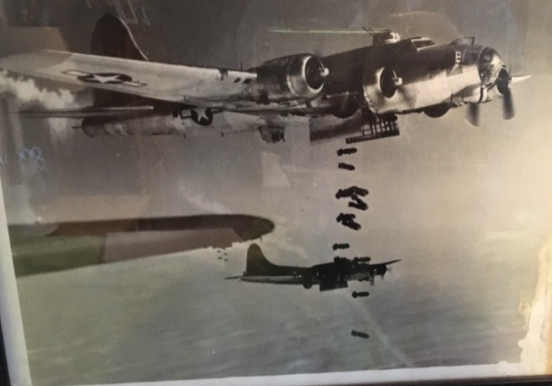 One of the most wrenching photos is also the only one with a clear view of the ground. A city opens up to view, explosions ripping across the center of the frame. A moment of war’s bombardment frozen for eyes in any time. Earl saw this destruction from above – he must have taken this photo from the yawning bay doors. The left corner shows a couple of the bombs close-up. What must he have thought, gripping the camera so far above the earth, crouching next to a window to death? 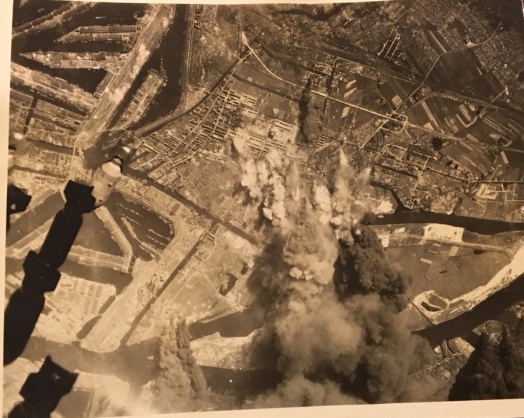 Some of the photos depict the ghostly trails the B-17s also spirited as they flew. They cement the coexisting beauty and terror Earl witnessed, as the planes painted the skies with hope for the Allied forces on the ground, but spelled destruction with bombs. Earl survived a war that killed with abandon, served right at its core. 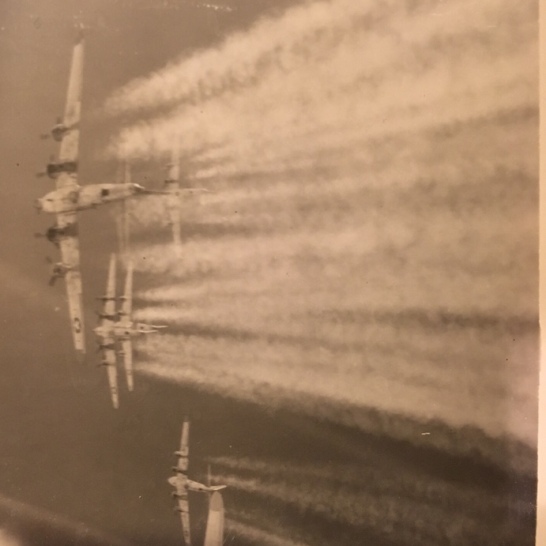 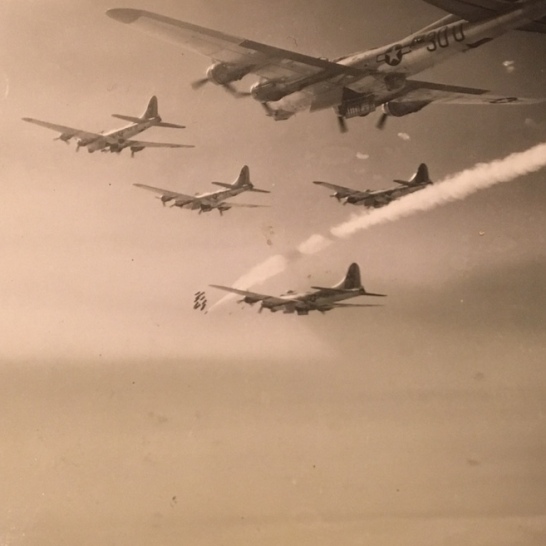 The B-17 seems an ungainly instrument of flight, an unlikely shepherd for flocks of young men. But in photos like Earl’s, a certain ballet takes form. The B-17s and their protective formations seem to float peacefully, their movement suspended but suggested. But fly these four-engined fortresses did, defying previous aeronautical achievements. Earl was also an unlikely passenger in the new planes, having never seen more than a cloud in the sky until later in his teens. But fly he also did, and he carried the sounds in his ears the rest of his life. His photos carry his spirit to me. The young man who took these photos would hold them in his mind forever, yet leaned into sweetness after his combat experience. His images remind me that he always appreciated the beauty among the ruin. I wonder what he could have done with this sensitivity after the war, and then remember that he never stopped building and creating. Earl lived to cultivate sweetness. 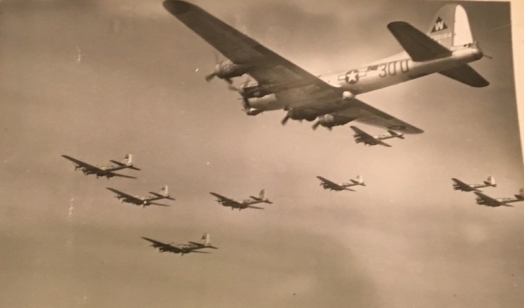 Something twists inside me when I look at these photos. I am on that plane. I can never get enough of seeing my family’s past selves, their faces and poses in pictures through the years, but there is something even better about photos they took themselves. It’s part of a documentary I’ll never be able to make. But I can peer through certain lenses. Earl left a partial map behind.

I think about how young he was, and how much he had already seen. Earl, a boy in a plane, his photos speaking across the skies. 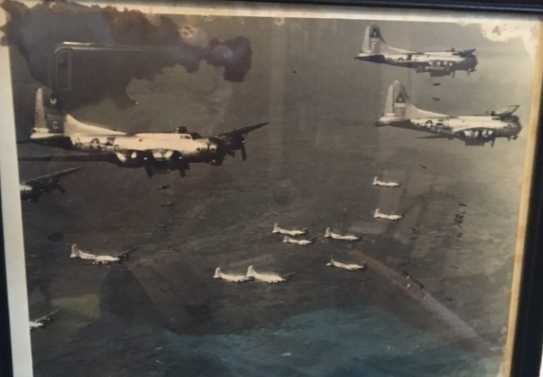