If doing something twice makes it a tradition, here I am following tradition and sharing my favorite happenings from the past calendar year. 2019 was a lot for the world and for me – but this collection isn’t in that spirit. The spirit that moves it is my truly spaghetti-to-wall brain. You don’t know what will stick, you’ve thrown a lot at that wall, but it’s fun to see what has staying power. True to my form, these things are quite a mashup of random stuff, highly irreverent but tinged here and there with deep reverence. And so:

Angela Hewitt with Music of the Baroque

On a snowy night in January, I got to see Canadian pianist Angela Hewitt perform Mozart’s Piano Concerto No. 27 with a woman conductor (Jane Glover). I died imagining that happening in Mozart’s own time. (His sister, Nannerl, was a musical talent in her own right but was lost to the invisibility cloak of old-timey marriage and man-centric histories.) To make things even better, I met Madame Hewitt afterward at a signing, and nervously told her how much the woman-led ensemble meant to me. I hope this is part of a growing pattern in the art world (I’d wish for a tidal wave, but…).

Getting Jeni’s in the mail

Yes, this did appear on the 2018 list, but it’s amazing every time it happens. Ice cream delivery is probably the best invention of the 2010s.

“Raquel, do you want some chicken?”

Buckle up for some nonsense. I don’t believe in guilty pleasures – if it brings you joy, and you’re not hurting anyone/it’s aboveboard/etc., who’s to say you should be ashamed of it? Objectivity is a construct of the patriarchy and cultural hegemony ranks the work of women and minorities lower no matter what. Ok, where was I – oh yes, Vanderpump Rules. This show about extremely awful people who don’t actually work at Lisa Vanderpump’s terrible LA restaurants is the rhythm of my life and you can leave if you don’t like that about moi. Everyone on this show is the worst (Exhibit A: Jax Taylor) and I should just look away but I cannot. Long story short, one moment on Season 7 in early 2019 got me through the whole winter, polar vortex incuded. DJ James Kennedy is at a party with his girlfriend and Millennial Teletubby Raquel Leviss. She’s talking to some other man by the bathrooms (??) when James sidles up to her and inexplicably asks if she wants some chicken. No opener, no party banter, just a chicken query. I was so taken by this exchange that I had to memorialize it. I’ve tried to figure out why I love this so much, and all I’ve come up with is that the unexpected is often very, very funny, especially when it involves people who are usually just tearing each other apart in search of reality show fame, not sweetly, weirdly seeing a woman about some chicken. That and perhaps the deep insanity instilled by winter.

I don’t know what football is but I do take any excuse to bake, so this dumb cake was born. I’m clearly not the originator of the Deflatecake confection but it was just really fun. I think the making of this cake was oddly soothing – scooping out the bits to make it look deflated were a kind of cleansing ritual. (I made a second cake for this sporting event but I won’t describe or picture it, as its inspiration eventually brought shame to me. Shame.)

Clearly traveling with your favorite people is a safe bet, but this trip to Paris and Strasbourg was even more amazing than I’d imagined. Yes, one of my companions was my sister, but I felt enveloped in such sisterly support and surroundings no matter what we were doing and where. Whether we were huffily stomping around art museums looking for women artists or eating gelato by the Seine, we traveled in a glow of ready-for-whatever’s-next. It was another level of travel – being fully in the moment with people who fully accept you. 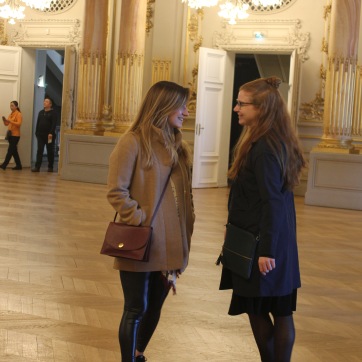 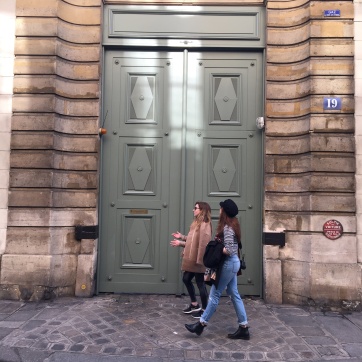 This is one of my absolute favorite podcasts, and its creators Bobby Finger and Lindsey Weber graced us with their presence earlier this year. By some miracle, while they were in Chicago, they decided to sample one of Adrienne Bailon’s favorite sandwiches on stage: a tuna salad sandwich with fruit punch in the tuna salad, dipped in more fruit punch. (They got the ingredients at a nearby 7-11 not long before show time.) Their reactions did not disappoint. Bobby and Lindsey, not only do I love your musings on the lower end of the celebrity ecosystem, but I’m so thankful that you SHOWED UP for your fans in such a significant way. I hope your health didn’t suffer as a result.

Hanif Abdurraqib at the Seminary Co-op

I went to see one of my favorite authors, Hanif Abdurraqib, read from his new book in a great bookstore. He did a reading, talked with Tara Betts, and thoughtfully answered questions about his ode to A Tribe Called Quest. In reference to fandom, he said “Adam looked upon the apple and said “I have no choice but to stan” – Mr. Abdurraqib raised the personal stakes with this book, while examining a phenomenon at a certain distance. And he’s truly one of the most gracious, graceful, patient humans ever – he met everyone in a very long line for his book signing, winding around the store and out the door, and took time to listen to everyone, too. I barked some gibberish about a piece he’d just written about Bruce Springsteen, and he let me gush – Hanif makes his readers feel seen. I walked out floating and in possession of a great artifact.

Discovering A Discovery of Witches

My sister and I can’t figure out why more people don’t watch this show, as it’s essentially Twilight with slightly older characters. (Perhaps I just cracked it wide open there.) I don’t  understand any of the plot lines and I never will, but it’s about an American professor who doesn’t comb her hair going to England to teach people about alchemical history or something but she doesn’t know she’s a powerful witch so a bunch of vampires and other creatures are after her. I guess? Everyone is eating so much scenery, and Matthew Goode’s contract seems to require him to always be drinking wine and never to have the worst storylines (relatively speaking). The accents are all over the place, nothing makes sense, I don’t know anyone’s name or backstory, but it still works. It’s absolutely bonkers and absolutely perfect.

Having been in Strasbourg just the month before, it was a bit of cosmic magic that I saw this show by a Strasbourgian artist so soon afterward. I didn’t know much about Mugler beyond his creations for Beyonce, so I went in mostly empty of any further context for his work. So much of what I’d learned previously about fashion came together in this space – the origins of runway shows and haute couture in theater, the celebrity factors, the excitement of seeing someone’s visions come alive in fabric and many, many feathers. 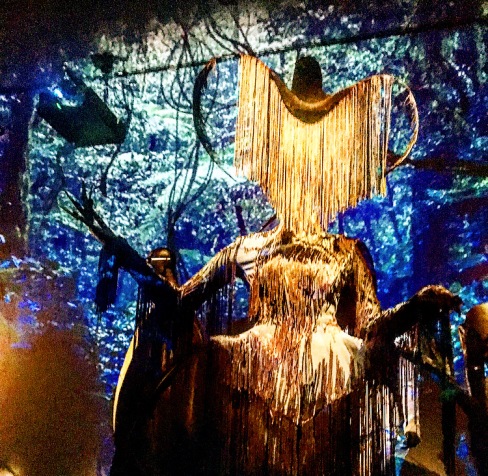 Werner Herzog came to talk about his new movie (Meeting Gorbachev) and was an absolute delight. Here are some choice quotes I recorded. It doesn’t matter exactly what they’re about; it just matters that you read them aloud in his accent.

I love Albanese gummies more than probably anything else the world has to offer, so of course I’ve always wanted to visit where the magic happens. So I stopped by the factory in Indiana, and jumped for joy.

I’m always looking for new forms of expression, and this year I found race signs. Not being able to run for a chunk of this year was disappointing, but it did help me discover this passion. There’s nothing like getting inspired to make something to support a loved one or friend in an athletic endeavor, and then scream like a banshee on the sidelines for the moment your target runs by, aghast at your creation. (Honorary mention for the sign/postcard I made. Also fun.) 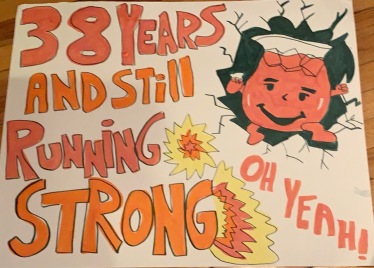 Helping with this was one of the best days of the year. More here. 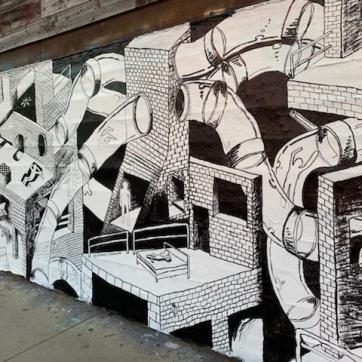 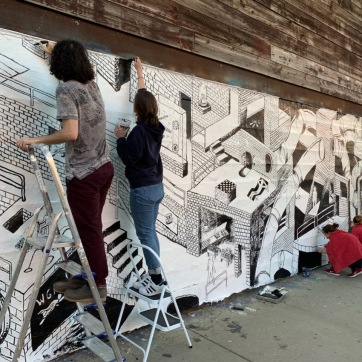 Pasta. Wine. Hiking our butts off.

It turns out that world’s most boring grandpa Mitt Romney is a bit of a saucy minx. After he hinted in an interview about looking/lurking at stuff on Twitter, Ashley Feinberg did the dirty work and found his secret account. His alias? PIERRE DELECTO. Maybe in 2020 I’ll stop laughing about this.

Ok, maybe along with Albanese gummies, Bang Bang pies are the other thing I love more than anything else the world has to offer. Getting to (sort of) learn how they work their magic was beyond fun, and I got an entire fancy pie out of it. As they like to say, pie solves everything. 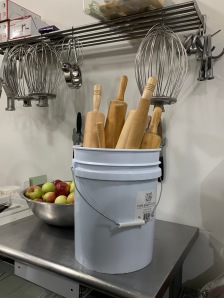 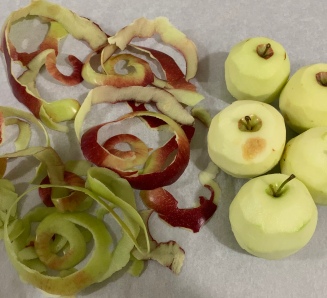 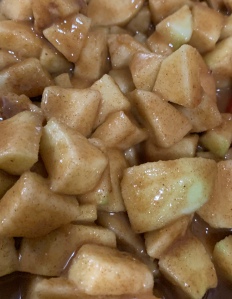 I went to see one of my favorite bands with my sister in Brooklyn – at the end of the set, the lead singer picked up one of the setlists from the stage floor and threw it into the crowd. My inner ninja kicked in and I grabbed that treasure right out of the air, seemingly before anyone else even realized what was happening. My sister is still surprised at my reflexes. (You should never be surprised at my reflexes.) It’s still one of my favorite moments of the year. 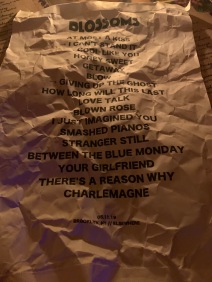 Dolly and Cher on a couch

This obviously didn’t happen this year, nor did I have anything to do with it, but it’s my list and it’s going on here, dammit. 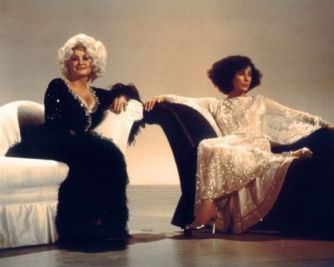 This started when I was recounting to my family how I made a bet with my friend where the loser would make a bunch of Jell-O shots. Fascinated by the prospect of this concoction, my dad requested some for his sampling. And so a festive family tradition was born – red and green Jell-O shots. Santa will never be the same.

I’m still crying from my experience in a space so important to Prince, so here are some words I wrote right after the pilgrimage. 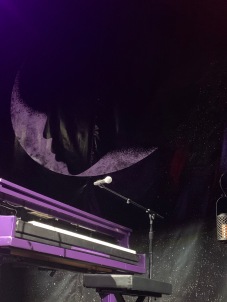