Here we are again, another tennis Grand Slam, more opportunities to ogle some outfits. Let’s look at what some famous people chose to wear to the 2019 U.S. Open in the idyllically named Flushing Meadows.

Once again supporting her friend Serena Williams at her job, Meghan Markle is all understated elegance. She knows all the cameras will be on her, but she doesn’t want to take away from Serena’s day. However, Meghan is still making a statement – the chic sunglasses, the simple dress with a cinched waist, and editor drape – her signature look. The Duchess checks off another patented public appearance.

Her daughter Bianca may have won the U.S. Open women’s final (first Canadian to do so), but Maria Andreescu stole the show in her flamboyant ensembles. Big hair, big glasses, big attitude. Beyond her fashion sense, Maria also brought puppy Coco to every match. From an ivory look draped with a voluminous Louis Vuitton scarf to a Versace dog embalmed with a lady wearing a cat hat with “Dog Queen” written across the neck, Maria wins the trophy for arriving like she’d been here all along. Respect to you and your dog, madame. 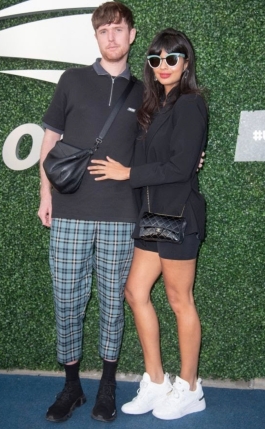 What are they lugging around in those matching cross-body bags? Sunscreen? Reading material? Tiny binoculars? Though I am glad to see a man carrying (heh) at least some of the purse responsibilities in a household. Otherwise, James aims for high-water haute couture and comes up a bit short. This whole look is a bit “Grandpa refuses to wear anything but his old golf pants and crew socks so we’re just going with it.” Jameela is part businesswoman, part bicyclist in some rather unfortunate chunky tennis shoes. Points for sports-inspired looks but try again next time, kids!

Nailed it – well-tailored jumpsuit, excellently layered gold necklaces, and a red lip. Nathalie also has some of the best hair in the business and is showing it off to great effect here.

Now I don’t want to say anything but rainbows about our poncho queen, but I ‘m just confused as to why she’s wearing my heinous khakis from my days working museum visitor services (in which many strangers told me many secrets). They should be thrown in a pile with those peep-toe nude wedges and promptly incinerated. But let’s focus on the positive – Martha’s remembering her posing prowess from her modeling days and serving knit poncho realness.

The shoes and sweatshirt say sporty, the jewelry says royalty.

Mr. Lee excels at monochrome ensembles (see: his Oscars homage to Prince). Not only is he mirroring the athletes in a Nike ensemble, he’s giving airtime to a very important project, 1619.

Still rocking the pink-tinted hair, Maisie shows out in red, white, and blue. I don’t love the frayed edges but the black combat boots pull the look together nicely.

World’s biggest tennis fan and sometime investment banker Tom Hiddleston is wearing a navy suit again. Shocking. This time he ditched the tie and is emoting more. What a snooze you still are, Tom.

A legend is a legend.

I hate whatever these shoes are called and the risqué prairie woman lace monstrosity, but the blazer and sunglasses can stay. 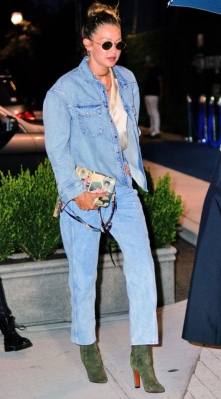 Despite attending an event with “U.S.” in the title, Gigi opted for a Canadian tuxedo. She had me until the Christmas-hued suede stilettos.

How high to those pants go? We’ll never know. 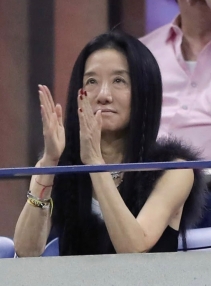 I don’t have notes on this outfit; I just like pictures of people mid-clap. (See: the best of the genre.) 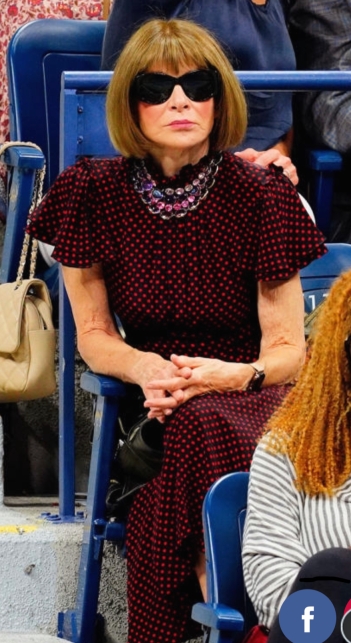 Did you know that Anna Wintour makes all of her own necklaces out of rocks she finds in aquariums at dentist’s offices?