YouTube is a treasure trove, if you want it. I go thrifting there sometimes (all the time), and the roadshow of antiques can surprise even a seasoned spelunker. One Sunday morning, while I was deep in a rut, the algorithm burped out something wonderful – Dua Lipa’s Tiny Desk concert from December 2020.

Ms. Dua is simply glowing – the light she exudes, and her band amplifies, is genuinely contagious. The smiling, the bopping. And that orange background! Is it light? Paint? Someone’s aura? I’ve been trying to name the color, and nothing seems quite right. Apricot? Tropical sunrise? Sherbet? Whatever it is, I want to eat it.

The musicians perform among that delicious color and a set mimicking a minimalist office, like someone raided the archives of Mad Men and spirited some pieces to a London studio. Dua is decked out in an updated version of a classic Chanel tweed suit, sans the restricting sleeves but complete with the “C” earrings. Her turquoise heels match the suit’s piping. Her band is in blazers and business casual. Chunky gold jewelry adorns all around. They are a team, they are a business. Glow, Incorporated.

After the first song, Dua explains how the pandemic separated them – lockdown stopped their impending tour in spring 2020. But it looks like they barely lost any time, beaming to be in each other’s company, making these sounds. They are a group of shifting chords, making beautiful music. I’m so drawn to their group, their universe. So at ease with each other, despite months of separation, probably degrees of isolation. Their choreography is connection.

This video only intensifies my lifelong fascination with backup singers. They tread such a fine line, complementing the lead singer while building the very foundation of sound. An underappreciated art form. Dua’s backup singers are a sherbet (and beige) quartet, each with their own style. They are unison and individual amazingness all at once. They enhance the overall glow my moth brain is drawn to – the world is full of backup singers. May we see them, may we be them.

My favorite of the four songs performed is a new version of “Love Again” – ‘70s -type weeping acoustic guitar to begin, Dua laments her situation, then her people chime in with their harmonies to bring in the love. “But goddamn, you’ve got me in love,” they intone over and over again.

This video brought me love again, it brought me light again. It circulates in my mind like so much dopamine (that’s how it works, right?). Dua glows on her own, but even brighter with her fellow musicians. It sparked something in me, too, a tiny fire I hope to build to a similar lava-lamp lustrousness as the background of this video. 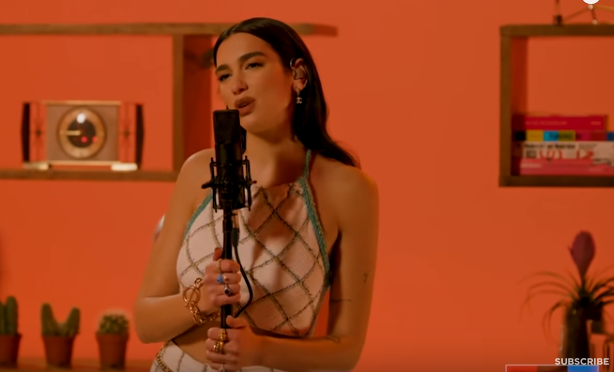 Here we are again, another tennis Grand Slam, more opportunities to ogle some outfits. Let’s look at what some famous people chose to wear to the 2019 U.S. Open in the idyllically named Flushing Meadows.

Once again supporting her friend Serena Williams at her job, Meghan Markle is all understated elegance. She knows all the cameras will be on her, but she doesn’t want to take away from Serena’s day. However, Meghan is still making a statement – the chic sunglasses, the simple dress with a cinched waist, and editor drape – her signature look. The Duchess checks off another patented public appearance.

Her daughter Bianca may have won the U.S. Open women’s final (first Canadian to do so), but Maria Andreescu stole the show in her flamboyant ensembles. Big hair, big glasses, big attitude. Beyond her fashion sense, Maria also brought puppy Coco to every match. From an ivory look draped with a voluminous Louis Vuitton scarf to a Versace dog embalmed with a lady wearing a cat hat with “Dog Queen” written across the neck, Maria wins the trophy for arriving like she’d been here all along. Respect to you and your dog, madame.

What are they lugging around in those matching cross-body bags? Sunscreen? Reading material? Tiny binoculars? Though I am glad to see a man carrying (heh) at least some of the purse responsibilities in a household. Otherwise, James aims for high-water haute couture and comes up a bit short. This whole look is a bit “Grandpa refuses to wear anything but his old golf pants and crew socks so we’re just going with it.” Jameela is part businesswoman, part bicyclist in some rather unfortunate chunky tennis shoes. Points for sports-inspired looks but try again next time, kids!

END_OF_DOCUMENT_TOKEN_TO_BE_REPLACED

I deeply identify with this song and dance by the wee page boy’d page boy extolling the virtues of berries and cream. To me, it applies to Wimbledon and the famous strawberries and cream of the All England Lawn Tennis and Croquet Club. When this tiny chap claps his hands at the prospect of a sweet treat via berries and cream, I clap my hands at seeing outfits and style at this annual tennis tournament. I’m convinced the royals and celebrities carefully calibrate their appearances, allegiances, and sartorial statements – Jude Law would never go on a day someone more famous will get more camera time, and Meghan supports Serena while other randos vie for the secondary coverage. Some berries and cream is better than no berries and cream. Forthwith, some fashion! (Player clothes choices are a different conversation altogether.)

Clearly these women will generate the most buzz when appearing at Wimbledon – together and separately. Into the hive!

One glorious (Earl of) sandwich (and everyone wins at sunglasses!)

Kate: Buttons! Bows! This dress has it all! The buttons say “I’m here for the business of tennis;” the bow says “I’ll also make small talk about your boat.” I don’t understand the forest green but I do understand Kate’s fashion choices tend toward militaristic influences. Carry on.

Meghan: Our Ralph Lauren princess is back at it. I don’t know if this is actually Ralph Lauren and I shan’t be googling it but it has that classic silhouette. The simple, crisp white shirt shows off the glorious pleated skirt to wondrous effect. Duchess Markle shows us once again she is Queen of Subtle Sophistication.

Pippa: I’m a sucker for toile but this looks like she got a last-minute invite to appear with the Duchesses while staying at her cottage in the English countryside so she had some mice and birds make a frock real quick out of her country chic curtains. I would like to stage a picnic on that pattern.

Meghan: Has anyone so successfully pulled off a fedora since Paul Newman in The Sting? Doubtful. What other powers does she possess if she can effortlessly slay a fedora look on a random Tuesday? Apparently the jeans are a no-no at Wimbledon, but if I were a duchess, I’d wear jeans any chance I got. I make the rules, you plebes! The light-checked blazer is a tennis homage, to my untrained eye, and I appreciate the casual cool.

Kate: Bows and buttons continue, but I love this. It’s Kate’s tennis whites with a little black to set it off. She looks like she’s going to underground to crack some codes for WWII Britain whilst tricking the Axis into thinking she’s just visiting her soldier. Some serious spy chic.

Kate and William: Once again we see the royals sunglassing hard. See this Everyone Looks Hotter in Sunglasses (ELHis) rule. They coordinated! Kate in a powder blue Fraulein Maria-esque frock – the sleeves, what is the folding there? Royal curtains again. But overall, a lovely summer look. I also like the flowery clutch, like she’s stashing seeds for her secret garden in there. William powdered his blue, too, taking cues from his Queen, as he should.

It absolutely delights me that a man who gets paid to lurk in movies and Benediction Corksnatch sat near each other at Wimbledon. What did they talk about? The intricacies of the Marvel universe? Their respective British private schooling? How much Pimms to consume before retiring to the yacht? Oh yes, sorry, their fashions – Mr. Hiddleston appears to have come straight from the investment bank he moonlights at, complete with navy suit. Really throwing caution to the wind there with the polka dot tie. I don’t understand the hair and I won’t respond to it. Mr. Cucumberbench is captivated by something on the court, and was clearly tipped off somehow to Kate’s outfit, because he brought out the powder blue. No competing with the Duchess, however – the is just boring. I’ll expect a better showing next outing, Mr. Corkybang.

An expert deployment of the Editor Drape, in lemon, no less. A delicious confection.